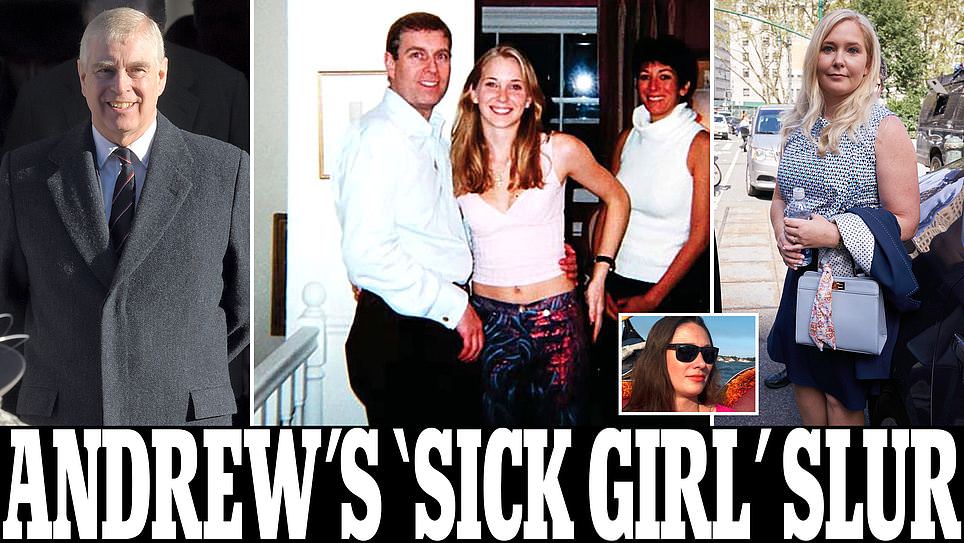 NEW Prince Andrew described his alleged victim Virginia Roberts as ‘a very sick girl’, The Mail on Sunday can reveal today. The Duke made his insensitive remark in a message to a friend and business associate just days after Ms Roberts described the appalling abuse she had suffered at the hands of Andrew’s paedophile friend Jeffrey Epstein. Her shocking revelations – which came in this newspaper – were accompanied by the now-infamous photograph of the Prince with his arm around her waist.The apparently dismissive comment to his friend – who had asked how Andrew was coping with the scandal -appears to question the mental health and credibility of Ms Roberts (right and main image with Prince Andrew in 2001). The Duke (left) made both the bad-taste joke and his comment about Ms Roberts’ health to his friend Jonathan Rowland in 2011. The ‘very sick girl’ slur came in an exchange seen by the MoS. Mr Rowland, the son of controversial property tycoon David Rowland, had contacted Andrew, saying: ‘Hope the press isn’t getting you down to [sic] much.’ The Duke replied: ‘Not at all!… She is a very sick girl apparently. The innuendo is the problem. But there is nothing that one can do for that! Shrug and move on.’ Inset: One of Jeffrey Epstein’s alleged victims who signed an open letter urging him to talk to the FBI for the sake of his ‘daughters and their children’.