SA, Justice for the Rhino…

Tired of all the negativity and abuse of the rhino like I am?
Good news now, finally!

Wednesday 3 April 2019 saw the successful conviction and landmark sentence of TWENTY FIVE years for each of the 3 Ndlovu gang members! This is just for 55 counts related to rhino poaching in the Eastern Cape province. Apparently, there may be more to come as there are 40 poached rhino in KZN linked to these individuals.

Initially, there were two rhinos, Thandi (meaning Love in Xhosa), an adult female, and Themba (meaning Brave & Courageous), a young male who were attacked and maimed by poachers in the Kariega Bush. Whilst Thandi showed significant improvement, sadly Themba slowly deteriorated due to circumstances. Seems Themba passed in a watering hole. It was believed he just literally laid down, gave up and died. It was a day of sadness and much mourning, especially Dr Fowlds who had tried so desperately hard to give the young rhino a chance of survival. Thankfully, research into Themba’s death has helped other rhinos to survive their injuries from poaching.

Thandi’s story so inspired Angie Goody that she committed her efforts to Rhino Conservation and, shortly after returning from Kariega, Angie started a small organisation known as Thandi’s Fund Raiser. It was from this that Thandi’s Endangered Species Association was finally formed in late 2014 as an Isle of Man registered charity. Since 2012 the organisation has raised many thousands of pounds and donations have been made to purchase vital equipment such as tracking collars, DNA equipment, microchips, telemetry, ongoing treatments for Thandi, and much more.

Thandi went from strength to strength and in late 2013, blood tests showed that she was in the early stages of pregnancy – a miracle in itself. Rhinos are pregnant for 16 months, so yes, a long wait. In October 2014 Angie Goody went back to Kariega Game Reserve as an intern to monitor Thandi in her late stages of pregnancy. Angie kept everyone informed of Thandi’s well-being and, on the 13th January 2015, Thandi gave birth to a healthy female rhino calf in January 2015. The calf was named Thembi meaning hope in Xhosa – a language that is spoken throughout South Africa. Thandi gave birth to Colin (born in 2017) and moved into the thick bush. 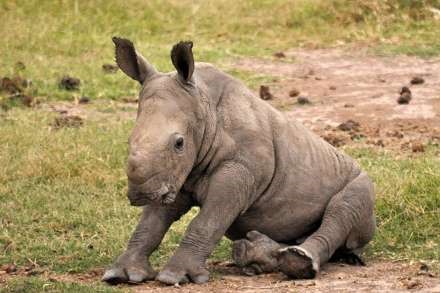 When she emerged, she was followed by a tiny baby, a first sighting (photo taken by guide Jesse). new calf was named Mthetho meaning Justice in Xhosa. This name was chosen to commemorate the conviction and sentencing of those who committed the heinous poaching acts. 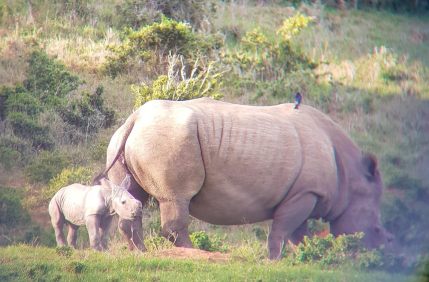 Justice has been done and we hope that this case will serve as a deterrent to other would-be poachers.

Hope and new beginnings for this mother who suffered greatly at the hands of poachers.